From woefully underpaid internships to legendary hiring bonuses at huge Silicon Valley companies, it’s hard for job seekers to know what they’re worth in tech. It’s even harder when they’re new to the rat race.

One undergraduate computer science student at Purdue University, Jesse Collins, has taken it upon himself to gather data from undergrads and recent grads to find out what’s going on, for real, around job offers and paid internships today in tech.

Collins released the preliminary results of his survey this week, in a Google spreadsheet here, and the study is already full of juicy tidbits.

For example, Collins found that, according to 19 survey respondents so far, Facebook is offering an average annual salary of $109,526 with a massive signing bonus of $79,737 for employees in technical roles like iOS or full stack developer, or software or network engineer.

By comparison, according to 31 survey respondents, Google is paying recent graduates in tech roles an average of $107,000 annualized salary with an average signing bonus of $27,327.

And Microsoft was offering new grads a $107,455 annualized salary with a $26,591 signing bonus, according to 22 respondents. 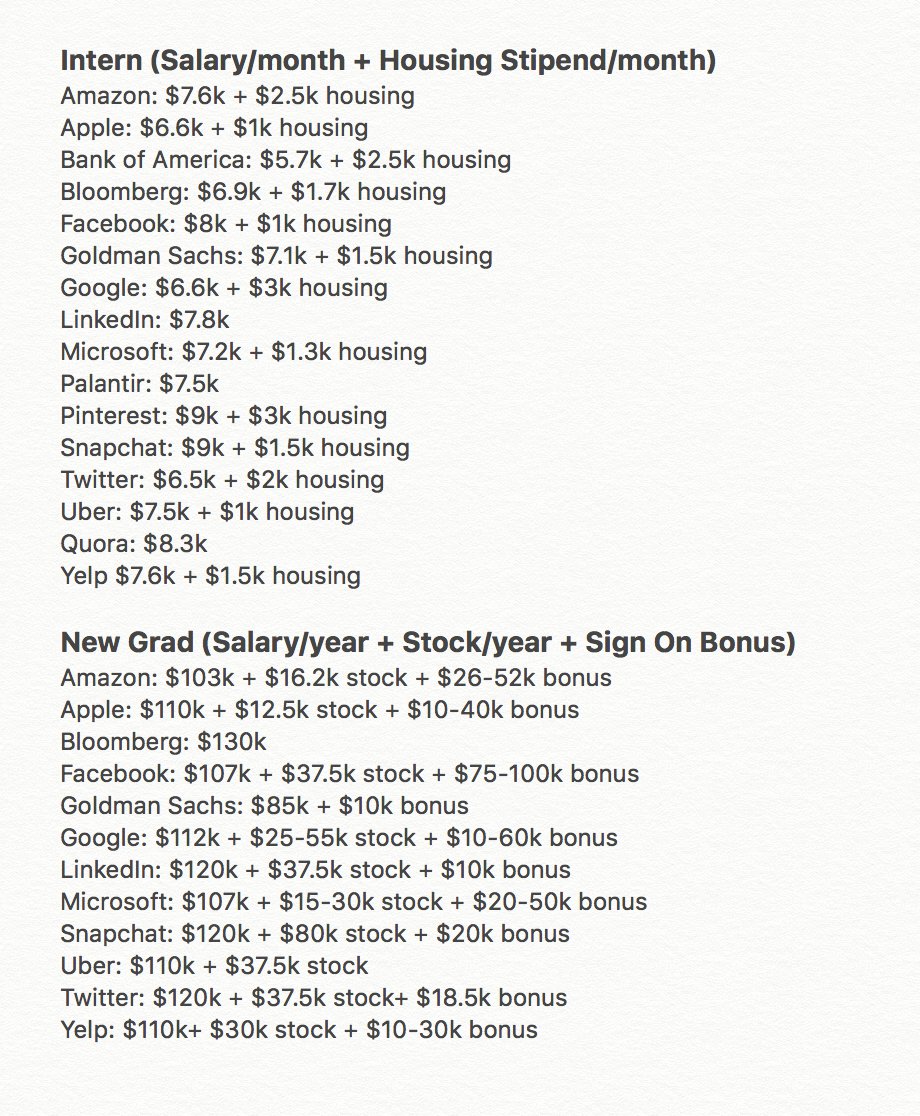 Looking at the self-reported salary and bonus data by job title, Collins found that software engineers and developers are out-earning their peers in user experience design and sales engineering by tens of thousands, annually.

And even though government salaries are presumed to be much lower than those in the private sector, working in tech in a government office will score entry-level engineers and developers a slightly better salary, on average, than working for a seed- or Series A-stage startup, the survey suggests.

It’s important to note that some large tech employers, including Facebook and Google, offer internships to both graduate and undergraduate students, and may be hiring people with doctorates and prior work experience into entry-level roles. That could account for some of those high salary and internship compensation numbers.

Collins began his survey last year, asking recent tech hires and interns what offers they got and from which companies, as well as for a bit of personal information, including their educational background and gender.

He says, “I’m interested in bringing transparency to job searches and salary negotiations overall, and hope that the data…will help prevent racial bias, a gender wage gap and the like.”

However, the same survey suggests that women are paid less, right after college, than men, at Facebook, Google and Twitter, taking stock, stipends, hiring bonuses and annual salaries all into account.

And women are not getting hired as often as men, the survey also reflects, comprising just 14 percent of new grad tech hires who were gender-identified respondents.

Collins isn’t the first to try to understand who gets paid for what in tech.

Other noteworthy researchers include Harvard economics professor Claudia Goldin, 20-something software engineer Rodney Folz, who began his own internship-focused survey as an undergrad at U.C. Berkeley, and companies that get paid by recruiters and job seekers, like LinkedIn, CareerBuilder or Glassdoor.

A self-proclaimed machine learning and stats nerd, Collins cautioned readers of his spreadsheet that survey results are not final, and the data set he’s gathered is not big enough to draw broad conclusions about pay, or bias in tech.

The information is self-reported and salaries were not adjusted for cost of living by region. And he hasn’t connected with companies to verify the data.

The survey, 2016 New Grad & Internship Offer Data, is still open if you’re a recent graduate or undergrad who wants to contribute internship or job offer data.

TechCrunch has reached out to a number of employers in the survey to verify the salary and other information reflected there. We will update this post if or when we have new information. Facebook does not comment on its employees’ compensation, a company spokesperson said.

Meanwhile, Collins has accepted a full-time job as a software engineer at the Seattle office of Curalate after he graduates from Purdue. He declined to disclose his salary in a press interview.